Woke up this morning at 7:30. Grabbed some breakfast across the street from the Hostel. I had orange juice with passion fruit (whatever that is), mixed fruit, and a chocolate french roll.

After this, Brian and I walked to the Users' Center to create my account. Then, we walked to the ID badge place to get my CERN ID. At this time, it was raining.

After getting my ID, we walked to meeting building, which happened to be on the other side of CERN (I walked across the Swiss/French border, can't even tell).

Morning Session
Listened to 3 talks. The first two where very CMS and physics heavy. I didn't understand much. Ian gave a talk about the future challenges in CMS computing. Punchlines where:
Lunch was at Restaurant 2. Had pasta with white sauce and small chunks of ham on top, salad, and a Coke. The Coke, like most drinks here, was not all that cool. I guess Americans are weird with their need for ice and very cold drinks. Pasta was good, but big.

Learned a lot about the CMS Production workflow.

Questions:
T1 Processing. Basically we're going to run out of computing after the end of the year. Especially if the data collecting is like last year, where 75% data was taken after September. This makes me wonder why CMS doesn't invest in what Miron has said before: Make it run everywhere and my toaster.

After the talk, we went to the 'CMS Drink' at a building right next to our Hostel (though it was a walk from where the meetings where held). This was just an horderve and wine event. I forgot how much I didn't like red wine. But the white wine was tolerable.

During the 'Drink' session, a few of the people that Brian knows planned dinner at a local chicken place, Chez Ma Cousine. 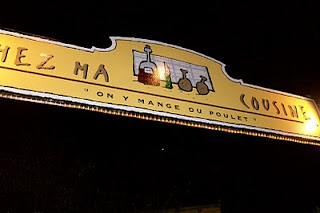 And a few people outside of the entrance after eating. 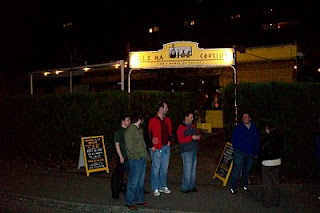