StashCache is is a framework to distribute user data from an origin site to an job.  It uses a layer of caching, as well as the high performance XRootD service in order to distribute the data.  It can source data from multiple machines, such as the OSG Stash.
In order to visualize the status of StashCache, I developed the StashCache-Tester.  The tester runs every night and collects data from submitting test jobs to multiple sites. 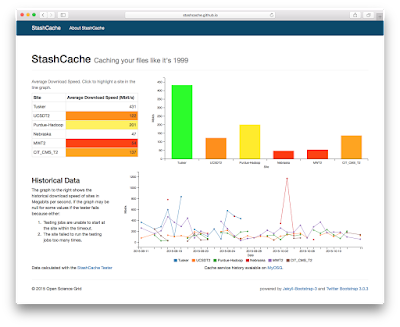 The website visualizes the data received from these tests.  It shows three visualizations:
In the future, I want to add graphs comparing the performance of individual caches in addition to the existing site comparisons.  Further, I would like to add many more sites to be tested.