Breakfast was orange juice, fruit, and a croissant.

Morning Session
This morning was the site related meetings. We had a talk from Oliver from FNAL regarding data operations. It concluded that we should separate tape from disk servers, effectively creating a Tier-2 at the Tier-1's, and using the tape as a separate storage.

Then next talk was on glexec. It concluded that glexec is not properly installed at most sites. Actually, only 1 Tier-2 is properly installed. With figures like that, one has to think it's not the site's fault, there has been a mis-communication. Brian pointed out that there has been multiple mixed messages regarding whether glexec was important or not.

The other talks this morning where on a monitoring technology HappyFace, and minimum site size. Both of these talks had little discussion.

For lunch, I met with Dirk and a colleague of his here at CERN. I had spaghetti with tomato sauce.

Afternoon
Immediately after lunch, Brian and I met with Aaron D. for a tour of the 0.5 site. The 0.5 site is the location of the CMS detector (0.5 is half way around the ring).

The Control room has many monitors with information on them. 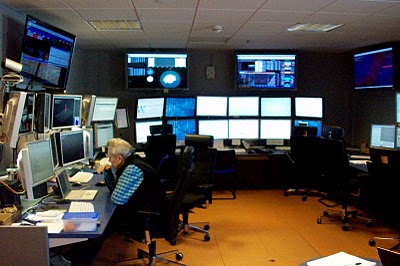 Next, we went to the assembly hall. This is a very tall building where the detector was built (in pieces) and sent down the shaft to the experiment hall. 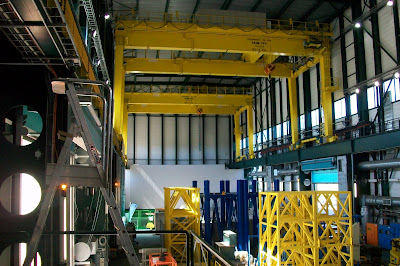 In this picture, you can see the large scale of the cranes and the building, which is roughly 5 stories high. It's currently used as a storage area. The blue scaffolding in the pictures is half the height of the detector. The scaffolding was used to access the beam pipe (made partly of beryllium) while inserting the pixel detector (designed and built at Nebraska).

After the tour, Brian and I sat around with Chris talking about the future of CMSSW (theme for the rest of the day).

We joined the USCMS meeting at CERN. There we heard about the outlook for funding in the US: unknown.

For dinner, we went to a Indian restaurant that is frequently visited by CMS. We ordered 4 different appetizers, 8 different entrees (there where 6 of us). Each of use tried all of the food. 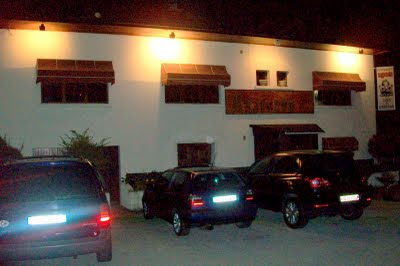 When we got back from dinner, we sat outside restaurant 1, discussing the budget and the future of CMSSW. Especially how we are going to deal with the ROOT IO layer.