Morning Session
This morning is Monitoring Task Force. This stuff is very interesting. I'm noticing a lot of CouchDB in the talks. I've read a little about CouchDB, it looks just like a distributed key/value store.

Talks on Xrootd and NFS4. They compared Xrootd and NFS4, both have bonuses and drawbacks. Xrootd has better vector reads, NFS4 is better at local access (maybe). Brian gave his talk on Xrootd. A lot about the demonstrator, and how it has progressed. Also the current schedule for improvements. There was a lot of discussion on monitoring, and how MonaLisa was a good base, but wasn't providing the monitoring we need for full deployment.

Lunch was pasta with tomato sauce.

Afternoon Session
LHC One talk: We are relying more on the network, so need better than best-effort network QOS.

A few more talks before we got to IO. Brian gave a good talk on the ideas he has on IO. It mostly dealt with compression and basket size for internal serialization.

There was a talk from another developer about how CMS IO was not designed for the world we're living in. There was a lot of discussion about this talk, not so much about the content of the talk, but about how CMS should look in the future.

Next was a talk from a FNAL grad student that replaced ROOT IO with google protobuffers. It was interesting, albeit probably not practical for all of CMSSW. But it did bring up a good discussion, that it's not difficult to get many times faster IO by bypassing ROOT IO. How do we approach the deficiencies of ROOT IO? Do we talk with ROOT? Do we make something an give it to ROOT? Certainly we don't want to 'own' a IO layer.

Dinner we went to a restaurant on the north side of the Geneva Valley. It had a great view of the Alps. 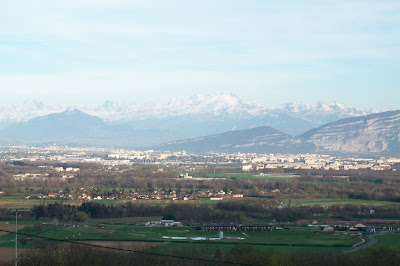 The restaurant was a regular french restaurant. I had a salad with ham, egg, and cheese. The main course was chicken, potatoes, and green beans. The desert was banana split with chocolate, strawberry, and vanilla ice creams. The receipt isn't very descriptive, I hope UNL will take it.

The restaurant was also a hotel. 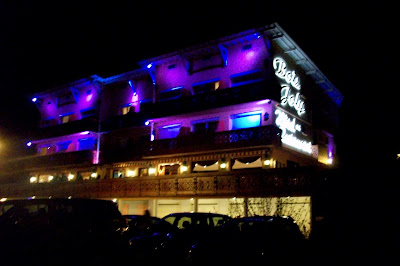