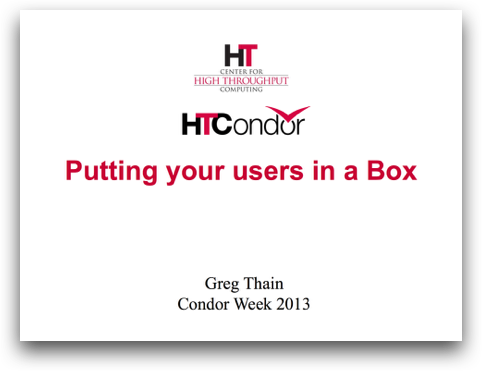 In 2013, Greg Thain presented putting users in a box for job isolation. It used three technologies in order to enable the isolation:

We used these chroot in Nebraska’s transition from RHEL5 to RHEL6. But the chroot capability has degraded over time since it is difficult to author and maintain raw chroots.

chroot, namespaces, and cgroups are all part of Docker’s containerization solution. Docker provides a very approachable way to compose and publish images. Further, we don’t need to maintain a RHEL6 image, only our local customizations on top.

We chose Docker over Virtual Machines due to potential IO bottlenecks that have been identified in recent publications.

Our host environment consists of:

The default container is based off of CentOS 6. It includes the OSG WN packages, gcc, glibc-headers… for various system depenedencies for the CMS project. Here is the Docker Hub.

The full DockerFile is on Github and below.

That’s it, that’s all of the DockerFile.

There are a few important directories from the host that need to be available to the container - for example, the HDFS-based storage system. Docker refers to these as volume mounts. Currently, we bring in a total of 6 different directories. Most volumes are marked read only - no need for the jobs to write to these. Exception is SSSD: need to write to a Unix socket to lookup usernames.

The HTCondor-CE accepts jobs into the cluster from external submitters. 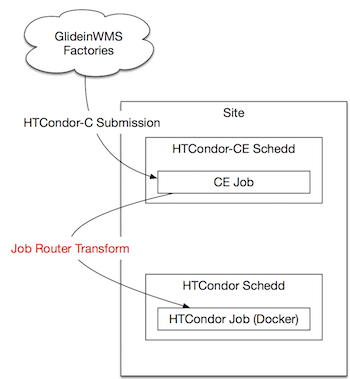 Snippets from the condor_job_router transform language

Running Production CMS and OSG jobs on Nebraska’s CMS Tier 2. Currently ~10% of the Nebraska Tier 2 is Docker-enabled. Will be expanding to the entire cluster in the coming weeks: goal is to be done by the end-of-summer. Next step is to further explore how to (safely) expose this capability to OSG VOs and users.

HTCondor treats all Docker images the same. We want to differentiate the images that come from the “good guys” (us) versus the “bad guys” (users). Still uncomfortable with the idea of allowing users to request arbitrary images. RHEL7.2 includes various sandboxing mechanisms: there’s no (publicly) known ways to break out, but the track record is relatively poor.

Things that would simplify our setup: